What You Can Learn From The Top 15 Most Relevant Brands (No. 11 Will Surprise You)

If there’s one word that dominates more mindshare among modern marketers than any other, it’s may well be “relevance”. I’ll grant you that ROI, accountability, growth, brand safety, transformation and purpose are right up there as well — but many of those other contenders for CMO anxiety are still in some way related to the idea of relevance.

We’re on a constant mission to find ways to connect emotionally, embed the brand in the right context, hijack news and popular culture, engage with influentials, embrace a cause that will resonate — all for the sake of making our brands relevant. In a world of rampant competition, price-shopping consumers and disintermediating platforms and voice assistants, the hope is that compelling relevance will help lift a brand above the noise, the barriers and the alternatives.

The question then is how to measure and track relevance — and in particular how to do it in a way that provides actionable insight. Communications agency network W2O Group recently launched an index that assessed 225 of the largest, most disruptive brands to rank them by relevance. Using a mix of inputs and data sources to gain a 360-degree picture of a brand’s relevance, the model relies on a proprietary algorithm that integrates key digital signals along with inputs from the organization’s key stakeholder groups.

The multi-source methodology is a departure from the various brand equity trackers already available. “We saw a gap in the market,” said Rob Jekielek, Managing Director of W2O Group. “There seemed to be an opportunity to bring together different forms of data to provide a richer picture of brand relevance in the social/digital age,” he told me. Gary Grates, a principal with W2O Group and the architect of the index said, “Relevance is the new reputation. Things move so fast, if you’re not relevant you don’t exist.”

Their relevance index incorporates search engine data as a measure of interest in the brand and activity with content and social media amplification as a measure of consumer engagement. To get a richer view of a brand’s health and relevance, their index also looks at two segments not usually touched by brand trackers: employees and financial analysts.

The process takes employee ratings data from sources such as Glassdoor and Indeed, and uses machine learning to evaluate the open-ended inputs. W2O Group’s Grates told me, “When you look at scale at the employee info, the way they talk about the company is very important to the brand.  People talk about the company culture and they talk about their personal experience.” Employees will communicate what the company stands for in their own words, and articulate their sense of the company’s values — positive or negative, according to Grates. To build in the Wall Street view of enterprise health and vitality, the index incorporates analyst buy/sell ratings.

So how do the brands rank? Here is W2O Group’s ranking of the top 15 most relevant brands: 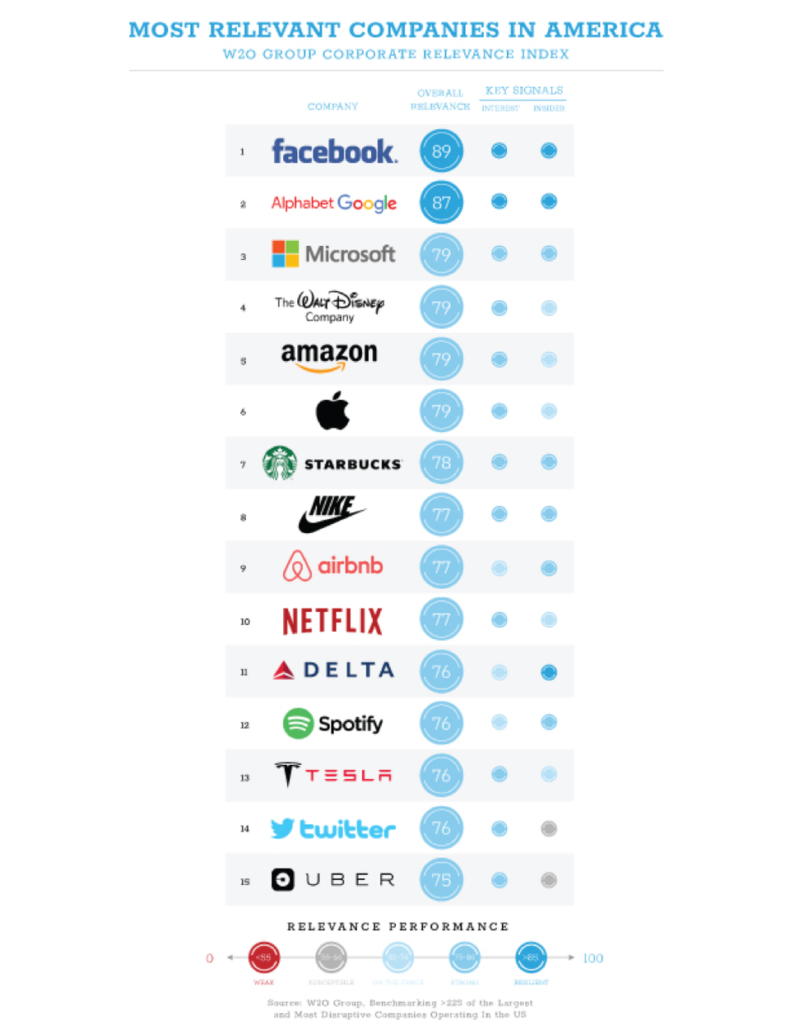 In some respects, the results are not shocking — we see here a collection of major brands that are broadly used and much discussed. But as you dig in a bit, a few interesting points emerge:

Primacy of platforms. We see heavy representation from the platform companies: Facebook, Google, Amazon, Netflix and Twitter, reinforcing the notion that platform — no longer content — is now king. These companies have created dominant franchises by providing the means for other brands to build their own digital presence and relevance.

Lots of disruptors. Many of these brands have thoroughly re-written the rules for their categories, redefining competition and prompting peptic ulcers among the incumbents — Airbnb, Spotify, Netflix again, Uber.

Not just digital leaders. It’s not only digital-age companies that make the grade: Disney, Starbuck and Nike all ranked high due to high levels of consumer engagement, with a particular strength in innovation.

Delta? One of the more initially surprising members of this club is Delta, which at first blush does not seem to scream relevance. But the airline makes the cut in large part due to the incredibly strong showing from its employees as they discuss life at Delta, the operating culture and company values. Having spent some time with senior Delta executives, I can vouch for the palpable culture of commitment to employees and culture.

No shortage of controversy. Perhaps as a bi-product of being a disruptor, a number of these brands bring with them a mixed bag of opinions. Facebook, Google, Amazon, Twitter and of course Uber have all weathered their share of controversy as they challenge convention, chart new paths and sometimes run headlong into a clash of values.

But bad by itself won’t do it. While controversy may be part of the mix that generates market-leading relevance, purely negative news isn’t enough to make the cut, Jekielek points out. “You’ll notice Wells Fargo is not on the list,” he said. “You can’t get there just by being bad.”

Big can’t buy relevance. It’s not as simple as Size = Relevance: you’ll notice Wal-Mart, for example, is not on the list. Nor can you buy your way into relevance with a giant ad budget: top spenders like AT&T, Verizon, GM, American Express and Comcast are all noticeably absent.

Perhaps the key point is that, on the whole, these brands represent a portfolio of strengths that combine to lift them above their often larger and higher spending competitors: they disproportionately show up on Fortune’s Most Admired lists; they are over-represented in Most Innovative lists from Inc. and BCG; they deliver compelling branded experiences; and they (mostly) rank among the most attractive employers. So from that perspective, “relevance” is not only the new “reputation”: it’s the new “well-managed”.