The 2018 NFL season was already looking like it would get off to a stormy start, with players kneeling, Trump tweeting and the NFL still lacking a coherent policy on the issue of player protests.

Then, into this mix comes Nike, with a new campaign featuring Colin Kaepernick,who began the kneeling phenomeno and remains its highly controversial figurehead. The first glimpse of the ad bears a portrait of Kaepernick with the tagline, “Believe in something. Even if it means sacrificing everything.”

What we know already is that the company is feeling various forms of pain right now. Ever since the ad debuted, social media has abounded with outraged consumers shredding and burning their swooshed apparel; and, Tuesday, Nike stock was down by over 3 percent.

So, will the company win more passionate followers among those who support the players than it lost by alienating those who don’t? Only time will tell.

In the meantime, brand managers and business owners may, like Nike, face the question of whether they should insert their brands into the hotly debated issues of the day. Should they stay on the sidelines and sit this one out? Or take a controversial position on a polarizing issue?

When, as an entrepreneur, you consider your political position, it’s important to first understand the environment your brand lives in. Society has become highly polarized, with people retreating to their tribes. Trust in all public institutions has cratered. With little faith in government, consumers now increasingly look to business to solve the big problems facing society. And, armed with social media, activist consumers have brands in their crosshairs, ready to call them out or use them as levers in their social/political agendas.

This is the new reality. And it means there are no safe sidelines. You can’t just assume you can sit this one out. Even if you have no plans to take any overt social/political action, you must prepare as though you do. Forces beyond your control — the public, an employee’s misstep, our country’s president’s Twitter handle — may force you into the spotlight whether you want to be there or not.

Here are some steps that all companies should go through as they navigate this highly charged marketplace.

Look deep into your brand DNA and define the values and beliefs that motivate the company. What principles are important to you? What basic beliefs drive choices and actions? If there’s a founder still present, ask what sparked that first gleam in his or her eye? If not, what is the company lore about the organization’s founding? What issues naturally touch your business model: your supply chain, your hiring needs, environmental issues, etc?

This grounding in values is the foundation for all that follows when you define your posture. It also prepares you for the day when you find yourself unexpectedly in the court of public opinion, forced to address an issue, make a decision or declare a position. Given today’s 24-hour news cycle, you don’t have time to ponder your beliefs while CNN is on hold.

Your brand has natural constituents or, in today’s language, those tribes that are particularly important to you: your employees, customers, partners, interest groups, etc. Think through which matter most, and make sure you thoroughly understand their issues, their concerns, the values that motivate them. As you define your issues agenda, you’ll need to be thoughtful about how that agenda may align (or not) with their interests.

The next step is to reach out and engage those tribes, to share your beliefs and values and enroll all those people in whatever posture you plan to adopt. Provide them with the facts, data and talking points about your principles and actions. That way, they’ll be prepared to speak up on your behalf, should you find yourself in an overnight brand crisis.

This is the really critical step: deciding how far you want to go. Do you play it safe and keep quiet, or go all the way out on the limb of a controversial issue, as Nike did? You have to make this decision based on several factors: How passionate is your commitment to the values you’ve articulated? What is the appetite for risk and controversy among your company’s leadership, shareholders and other stakeholders? How does the short-term revenue risk balance with the longer-term benefits to brand health?

In my book, Marketing in the #FakeNews Era, I describe a range of choices that gradually increase your relevance with those who agree with your position, while at the same time raising the risk of alienating those who disagree.

The most conservative level is values, where you don’t express your beliefs and values externally. The next level is purpose, where you embrace some generally non-controversial higher purpose, as Dove, for example, has done in championing “real beauty.”

More controversial is what I call issues, where you take on a sharper, more tension-filled topic — the way Heineken did, for example, by addressing society’s lack of civil dialogue. The most provocative posture is position, where you stake out an A vs. B, for-or-against position on a hotly debated topic. In this mode, you have the greatest likelihood of winning passionate fans while also generating equally passionate detractors.

Related: Why Businesses Should Think Twice About Getting Involved in Political Issues

While these new realities certainly present many challenges to brand and business managers, they also present an opportunity to authentically engage with the broader world, develop even deeper relationships with customers and maybe even do some good. And let’s face it: The world could use your help. 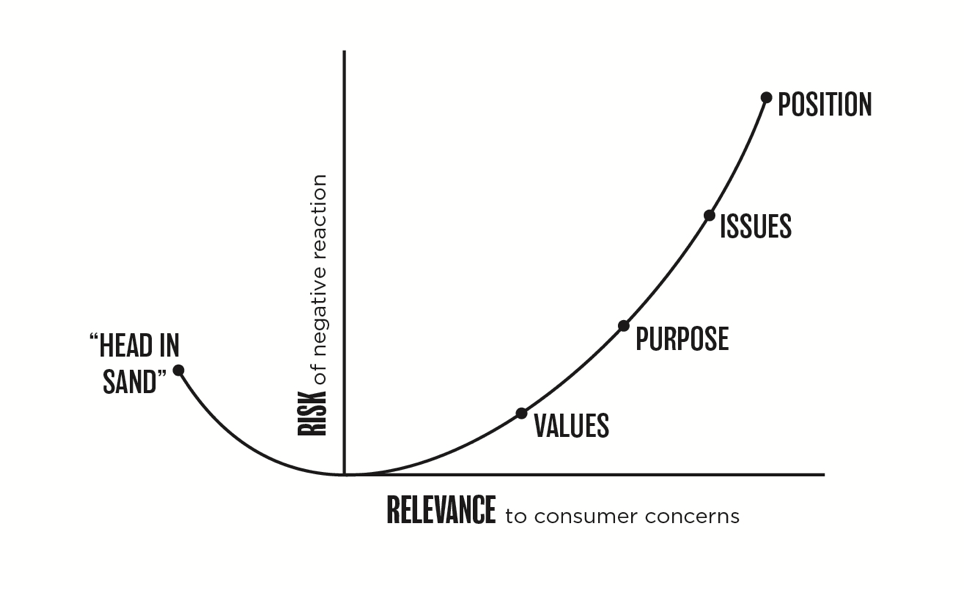